Trump of the Hundred Days

I think that after 100 days I can call you Donald, even though it's the dorkiest of the all dorky names in human history.  I mean, when has there ever been a king or an astrophysicist or a great artist named "Donald"?  The answer is "never".  There might be a reason for that.

(BTW, I'll call you "Mr. President" after I've seen your tax returns, and the FBI weighs in.)

I've been sitting here at my desk, racking my brain, trying to think of an appropriate way to commemorate your first 100 days in office, with little or no inspiration.  But, in the inspiration department you have never failed me.  So I was patient.  And just the other day:

"I thought it would be easier."

What could possibly be the reason for that?  I think I can answer.  I've had employees like you before.  I've been an employee like you, which is why I know how the psychology works.  Basically, it consists of equal parts ignorance, arrogance, and immaturity.  Add to that, a big mouth and a pathological need for attention, and - voila! - one spectacular asshole.  Completely contemptuous of his/her boss and absolutely sure he/she could do a better job.  My punishment was to be busted down to underemployment, where I learned a little humility.  I only hope that someday you receive the same treatment.  Maybe your wife would consent to being in the same room with you again.

Sorry to say, most of the difficulties you perceive are of your own making:
(Neil Gorsuch?  Like "phase two" of your health care plan, still an unknown commodity.  I hope I'm pleasantly surprised.)

Well, anyway, you're out there somewhere celebrating your milestone.  Non-alcoholically, of course, and hopefully with a minimum of uninvited pussy-grabbing.  But I, for one, couldn't be happier about your abundance of dismal failures.  Good Lord, what if you had succeeded?!

To be fair, you have had one remarkable accomplishment:  You have made Americans nostalgic for George W. Bush.

Keep up the good work,

What Is Wrong with This Picture? 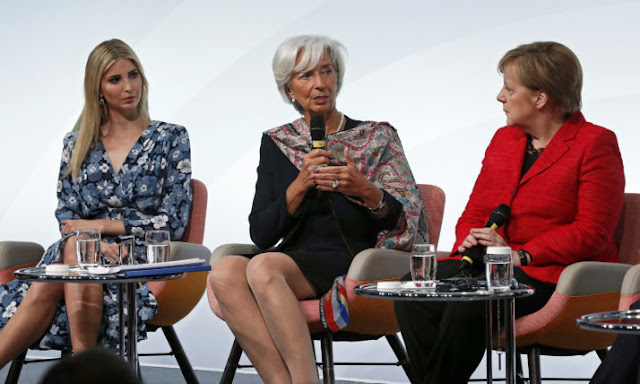 Hint:  It's not Christine's scarf.

"Nobody has a sense of humor anymore," you recently bemoaned to a television interviewer when your witty remarks about Hawaii (see previous post, "Aloha!") seemed to fall flat.

You may be right.  But have you considered that you are the reason for this?

In the meantime, to get America laughing again:

And my proposed entries into this year's competition: 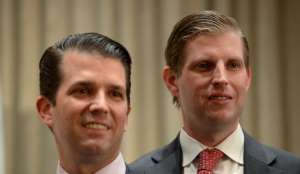 Please go back to Alaska and keep an eye on Russia for us, okay?

P.S.  I'd like to go back in time to before you bought that shirt.

Posted by Connie Staccato at 9:43 AM No comments:

Greetings from an island in the Pacific!  You know, that one island...or maybe there's more than one...sort of like neighborhoods or counties or districts or something, yeah, that's it...Hawaii!  Home of beautiful beaches, a big-ass telescope, volcanoes, a Polynesian cultural heritage, Maui Wowie (good stuff that good people don't smoke), and - yes! - actual federal judges.  With all the actual federal powers that other federal judges have.

And so are we, equally amazed that even wonky-eared little toads named Beauregard born in boondock (from the Tagalog, meaning "backwater hell-hole") Alabama can wield power in this great (or will-be great, once your bloated bromance gets back from Palm Beach) country.

Dude, it's called democracy.  You're the Attorney-fucking-General.  You shouldn't have to Google that.

With one sentence you kicked us out of the United States without so much as a referendum.  Not that all of us mind, given who's president.  The Hawaiian sovereignty movement is particularly pleased.

Are you still holding Barack Obama against us?  Tiny Bubbles?  (We're sort of with you there.)  Or, maybe, given the situation in North Korea, you're trying to move the U.S. border a few thousand miles to the east?

Whatever.  We still love you, Jeffy.  And if you ever come to...um...Hawaii, we'll be happy to take your money and laugh at your Speedo.

Posted by Connie Staccato at 11:48 PM No comments: 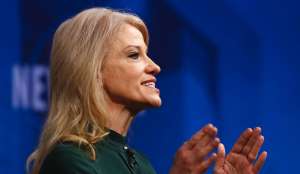 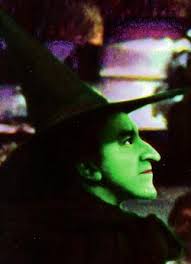 If you get rid of Bannon and Priebus, that might - possibly - jump start my breathing.

Posted by Connie Staccato at 11:43 AM No comments:

Nothin' like a war to change up the headlines...

Posted by Connie Staccato at 8:59 PM No comments:

Okay, so imagine that you are a Russian media network.  And you decide to have a party...

"Let's have a party!"
"Hella yeah!"
"And let's invite Vladimir!"
"OF COURSE!!  It's not a party without Vladimir."
"What kind of entertainment shall we have?"
"SPEAKERS!  Let's have speakers.  I love speakers!"
"Good idea!  Now who shall we invite to speak?"
"How about an American general?"
"Woo-HOO!"
"And we can give him money!  Lots of money.  And vodka.  And he can sit next to Vladi."
"Brilliant!  How 'bout that one old geezer who can't stop blinking...whatshisname..."
"Flynn!  Dude, I'm down.  It's gonna rock."

Can you picture it?  Right.

Posted by Connie Staccato at 10:20 AM No comments:

"Beware of all enterprises that require new clothes." - Thoreau