"Nobody knew that healthcare could be so complicated." - President Donald J. Trump

I think it's an IQ thing.

Posted by Connie Staccato at 5:20 PM No comments:

What Were You Thinking?

Tell me you did NOT schedule the Governors Ball on the same night as the Oscars!  I can't believe my eyes, my ears, and the fake news!  What possessed you?  (Let me guess:  Steve Bannon.)

I knew you were a bully.  That's part of what some people (mainly those who need to repeat high school) consider to be your charm.  Sure escapes me, but then I am neither pathetically gullible nor pathologically masochistic.  (I love you for other reasons, like you're writing my next book for me.)

You tweeted that 46 governors attended.  "A record number", you said, and since I have no way of fact-checking that, I will assume it's about as accurate as your crowd-size estimates.  I will also assume that these governors attended with their spouses.  And I will further assume that the following conversations took place in many-a-governor's home:

"Honey, we have to go to the president's Governors Ball."
"I'd rather have chemo."
"It's on the same night as the Oscars."
"Are you fucking kidding me?"
"We can dance the night away with the whole Trump family."
"I'm calling a lawyer."

Sucks to be a governor these days.

Actually, sucks to be anyone.

Looking forward to your congressional address,

Posted by Connie Staccato at 10:29 AM No comments:

Maybe you'd better sit down for this.

It's your homeboy Steve Bannon!  I didn't so much "find" it as figured it out.

Why, you may ask yourself, would my BFF Stevie be leaking all this terrible (fake?) news about me?  Well, you pride yourself on being a simple man (so true!), and in keeping with that, the answer is also simple.

This is how it works:
Personally, whenever you start acting...hmmmm...questionably, I google Steve Bannon.

That guy should be doing shell games on the subway.  Missed his calling.

Posted by Connie Staccato at 4:42 PM No comments:

Great party, dude!  Now we finally have a precedent, finally!

Or at least that's what it looked like from this side of the fake news media's glowing reports.  "Disneyland for conservatives" is how one happy camper put it, though a lot of you sounded like you'd been on the Mad Tea Cups for a few too many spins.

Experiencing some major FoMO here.  Who knew the Conservative Political Action Conference, something I had been (blissfully) unaware of all my life, would be such a blast?  This party had everything:  plenty of booze (apparently), a plethora of non-creative fiction, Russian flags, art therapy (?)(!), groovy young people wearing "Socialism Sucks" t-shirts...

...and a bromance between Steve Bannon and Reince Priebus that was so darn hot that I'm thinking you might want to ask them which bathroom they want to use.

Believe me, I couldn't stop combing the Internet for juicy details.  That is, until I came across a video of a some dude with a truly terrifying hair transplant telling everybody how much fun you really are.

As if we couldn't guess.

Then there was Kellyanne (you know...that one girl...), at her best, charming the crowd with her cleverness ("TPAC" - too cute!) and laying it out once and for all that she is not a feminist.  At least not in the "classic sense", something that is confusing to people who own dictionaries.  But my son told me that he saw a video of her punching out some guy at the inauguration (I bet he said something about your dress, Kellyanne.  Did that bastard tell you he didn't like your dress?  Honey, nobody liked that dress), so I'll give her a pass.

Posted by Connie Staccato at 6:31 PM No comments:

You promised you wouldn't tell!

Please keep Steve Bannon where we can see him.

Those naughty Ruskies!  Missiles, spy ships, and goodness knows what else?  Maybe they could get to Ivanka or Melania with some "fake fashion news"?

Maybe they already have.

Well, at any rate, this is it.  Your moment.  All eyes on you.  ACT TOUGH!  I'm sure everyone will be enormously impressed.

I hear you're taking time off from the maelstrom in the White House to kick off your 2020 re-election campaign in Florida on Saturday.  Here's some advice:

What a week you've had!  A HUGE job, putting together a veritable Marvel Universe of scary guys in your cabinet, each more worrisome than the last.  Sometime soon I'm going to make a list of them with their super-names and super-powers, but they're coming at me so fast and furiously I'm having a tough time keeping up.  However, I've already got your super-name ready: Agent Orange.

Like it?  I think your super-power will be blinding idiots with alternative facts.

The last two cabinet posts...what can I say?  A school marm and a hanging judge.  When does John Wayne ride into this scene?

The hanging judge: Jeff Sessions.  Is that a real person or were you somehow able to reanimate the corpse of Henry Gibson? 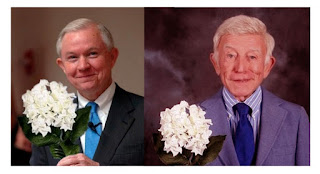 But there's something I noticed that's got me worried.
People with suspicious natures might wonder about that.


Posted by Connie Staccato at 4:05 PM No comments:

I'm sorry because your handsome, progressive, well-educated, well-mannered, and legally elected head of state - with the very nice name - had such an unpleasant experience with our new (sort of a) president.

To be fair, Steve Bannon was in the room and Mr. Trump should have just handed him the phone, but that might have been much worse.

Let me tell you a little story.  Back in the days when I was gainfully employed, I worked for a company which came up with this brilliant idea: They gave all their managers psychological tests, and - based on the results - categorized them into one of four personality types.  The company then gave us cards that detailed how to interact with people from each of these four categories.  The idea was that we would consult the cards for tips on how to effectively communicate with one another.  A sort of "cheat sheet" on how to deal with humans.  It was recommended that we also keep a card by our phones.  I am not kidding about this.  I wish I were.

So, based on what I've seen so far - and America has a pretty lengthy history with the Trumpster - I've come up with a cheat sheet for Mr. Turnbull to keep by his phone, based on Mr. Trump's personality traits (I'll leave the category up to the popular imagination).  Hopefully, this will prevent any future misunderstandings.

Things to Remember When Talking to Donald Trump
I am basing #15 (above) on his use of the word "unpresidented" as an adjective.

I'm sure you and I would both love to see it used as a verb.

Q:  What do you get when you cross a Klingon with a turkey?


Posted by Connie Staccato at 8:54 AM No comments:

I've been pondering your existence for some time now.  Up until yesterday it's been mostly a fruitless endeavor.  But yesterday, in a moment of pure serendipity, I had a flash, and - wow! - I get it.

What is it I understand now, that I didn't understand before?  Why, how things work in the Trumpiverse!

(For the record, I believe that we are all part of a patchwork multiverse, inhabiting unique and individual universes, each one subject to our personal interpretations of the universal laws of Nature.  This might very well be the purpose of humankind.  Please don't tell Mike Pence.)

Here's how I think things work in the Trumpiverse:
Do I have that right?

If so, then let me congratulate you on a spectacular display of - dare I say? - sneakiness.

And one of which, I'm sure, Bill Belichick would approve.

May the force be with you, and Go Falcons!

Posted by Connie Staccato at 3:38 PM No comments:

I'm sure by now you're asking yourself, "What's a girl gotta do to get a little 'us' time with her husband, without upsetting the entire free world?"

Don't you fret, honey.  Even though "us" time for me and my husband tends to center around doing laundry, this underemployed household would like to thank you for making us believe in princesses.  (Jared's hand on your ass was just the whimsical touch needed to keep it real.  I'm sure he got a wink and a slap-on-the-back from Daddy Warbucks for that one!)

I hear there are some spoil sports out there who are boycotting your fashion line.  No offense, Vanks, but you're making it a little too easy for them.  I mean, you're not selling anything really distinctive, are you?  In truth, a die-hard Ivanka Trump fan could switch over to Calvin Klein (or Ralph Lauren, Vince Camuto, Michael Kors, etc., etc.) without skipping a beat.

But I'm not the type to point out a problem without offering a solution, and here it is:  How about bringing out a line of clothes for nuclear winter?  I'm pretty sure you'd corner that particular market.  And market there will be, if I'm reading the stars right.

Think about it.  From this:

I'm sure you could do better.  Some bold accessories?  Perhaps a sequin or two?

Posted by Connie Staccato at 10:01 AM No comments:

View my complete profile
"Beware of all enterprises that require new clothes." - Thoreau